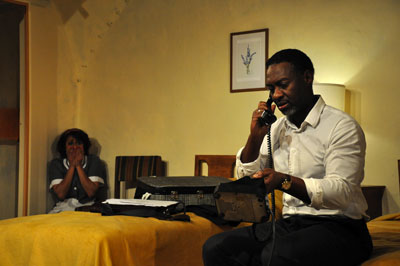 Set at the Lorraine Motel in Memphis in 1968, The Mountaintop dramatizes the night before Martin Luther King is assassinated right after he delivered a speech where he foretold his own fate: I may not get there with you, but I want you to know that tonight, we, as a people, will get to the Promised Land.

Katori Hall weaves a powerful, poignantly funny, surreal fantasy about a conversation between King and a mysterious hotel maid who brings him a cup of coffee to his hotel room late at night. Their meeting prompts him to confront his life, his past, his legacy and the plight and future of civil rights and African Americans. Hall’s insight, light touch and lively mood depicts King as a man with very human faults who was nonetheless capable of inspiring millions to hope and move toward equality and justice.

The Mountaintop literally explodes into metaphysical magic realism, ruminating on race and politics, life and death in ways that connect King’s legacy to every person in the audience. Hollywood Reporter

An emotionally powerful and theatrically stunning moment of truth. Variety

Black History Month 2020, in collaboration with the US Embassy Vienna