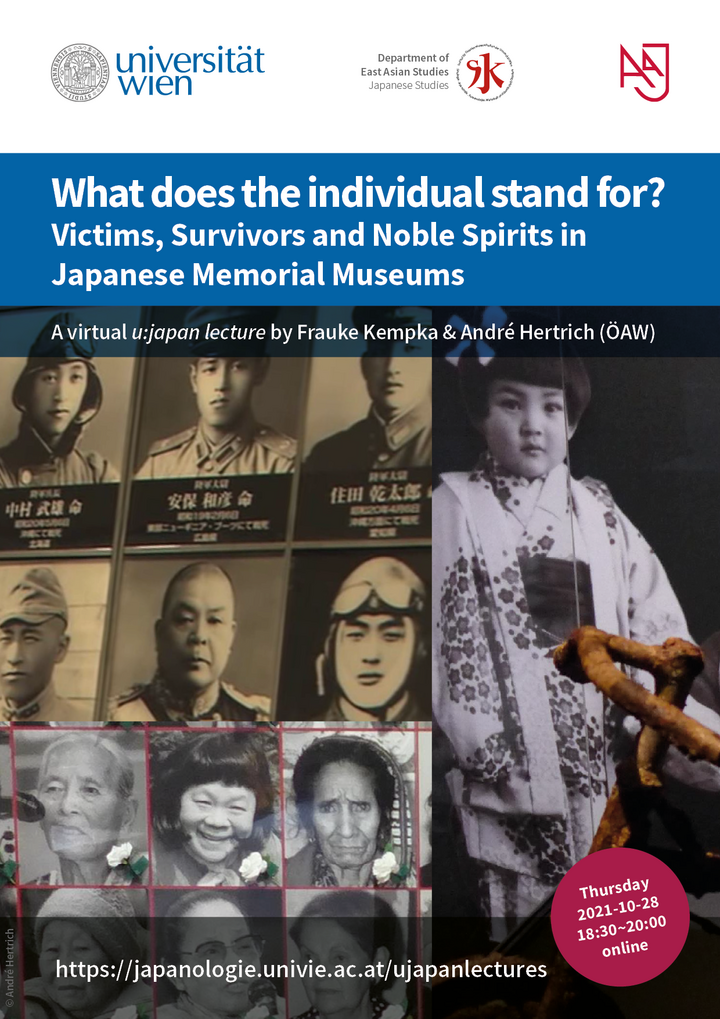 Emotionally highly charged representations of individuals have become a prominent feature in many museums commemorating atrocities around the world. However, similar exhibition designs do not necessarily imply similarities in the contents of an exhibition or in its contributions to debates on commemoration. As a means to convey very divergent narratives about the war we will focus on representations of individuals at the Women’s Active Museum (WAM), the Yûshûkan and Hiroshima Peace Memorial Museum. All three museums refer to WWII, but are otherwise worlds apart in their contributions to debates on how to commemorate the war in Japan.

The WAM is a small private museum. It commemorates women who were exploited for sexual slavery by the Imperial Japanese Military around Asia, the so-called comfort women. Its exhibition places a strong emphasis on Japanese perpetratorship and the victimization of the women survivors. Since the state’s involvement in and responsibility for the systematic perpetration of sexual slavery is often broadly rejected by conservative or right-wing actors in debates on WWII commemoration, the WAM is taking a critical stance towards mainstream debates. The Yûshûkan however represents a completely different brand of war memorialization. It is part of the Yasukuni Shinto Shrine, where the spirits of 2.5 million Japanese war dead are enshrined and deified. The Yûshûkan exhibits artifacts that are attributed to the individuals worshipped as “noble spirits” at Yasukuni Shrine. The exhibition stresses their humanity as loving husbands or dutiful sons and daughters and highlights their death as the ultimate sacrifice for their loved ones, alongside emperor and nation. Whereas the Yûshûkan seeks to present its „noble spirits“ as role models for today’s generation, the Hiroshima Peace Memorial Museum places its focus on the victimization of the city’s population by the atomic bomb and the horrors of nuclear warfare. Especially the new exhibition, which opened doors after an intensive renovation in 2019, puts the stories of beloved ones killed by the atomic bomb in the centre of its attention. Thus, the exhibition aims at “psychologically impact and […] emotionally grip the visitors” (City of Hiroshima) by concentrating on the individual victim and the feeling of loss and grief.

We are therefore presenting findings from three Japanese museums that are representing opposing ways of commemorating WWII. Yet individual photographs, personal artifacts and biographies are on display in all three exhibitions. In our presentation we are unravelling the different expositions of individuals within the WAM, the Yûshûkan and the Hiroshima Peace Memorial Museum. Assuming that “an exposition is always also an argument” (Bal 1996), we outline the museums‘ arguments as a contribution to the ongoing debates on how to commemorate WWII in Japan.

Frauke Kempka is an Associated Researcher with the Globalized Memorial Museums ERC project at the Institute of Culture Studies and Theatre History, Austrian Academy of Sciences. She holds a Ph.D. in Japanese Studies from Martin-Luther-University Halle-Wittenberg, Germany and an M.A. degree in East Asian Art History and Japanese Studies from Freie Universität Berlin.